I’ve been working really hard to use up more and more of my older fabrics. They’ve been hanging around so long that my eyes just cruise right past them. They have become no longer important, a nothing. I previously talked about my current project here and here.

Exuberant Color was talking the other day about how so many people were working on using scraps up and she’s right. I recently read a study on how much people spend per week on fabric and it ranged from $0, for those up~cycling, to hundreds of dollars per week (sounds like collectors, to me!). With the majority saying times are tough, they spend as little as possible while using what I have and I can’t buy anymore fabric until I use what I have. I’ve been thinking I’m in the last category. I have enough fabric to last a life time. I either have to get cracking or give it away and be done with the guilt. I created this quilt from a bunch of 80’s era mauve~y pinks in the Jane Austen style.

This is how I put a quilt together. On the floor, in our lower level. 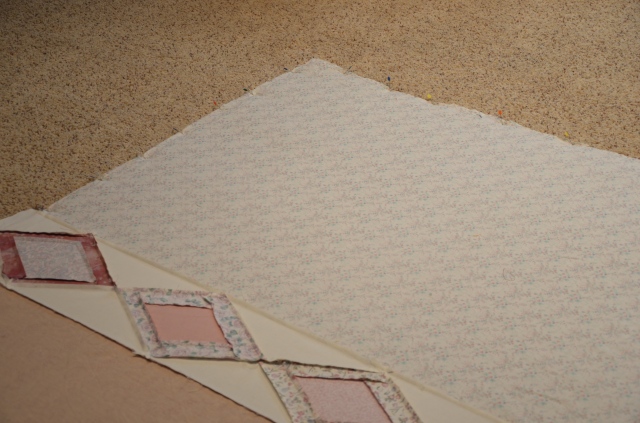 Usually I use painters tape all around the edges to pull the backing tight. Painters tape doesn’t have a lot of residue like masking tape does so it leaves less behind on your carpet. But in recent years they’ve gotten pretty fancy and the tapes have so little residue they aren’t holding the quilt back tight. Especially when it’s a large quilt and I’m crawling around on it to pin it…. If it’s not tight, while basting, you end up with all this extra fabric that creases over on itself on the back of the quilt. Not very attractive and I’m sure it doesn’t wear as well, either.

I’ve read where other quilters are using an aerosol spray adhesive, a basting method I’ve never tried, to bond the layers together, temporarily. I grabbed a can the last time I was at the quilt shop, brought it home and daughter said no. No, because if you don’t wear a fancy breathing mask that adhesive will end up in your lungs and you could die! Okay that may be a little strong, but you get the point. I watch what I put in and on my body so why should I want to inhale glue droplets?? Wow. Made sense. She learned all about the dangers of spray adhesives as an art major.

The more I thought about it the more I imagined droplets of adhesive everywhere. And wherever there is adhesive dust is attracted…. So back to the big ole drawing board….

I got to thinking and decided to give pinning it directly into the carpet a try. I put the pin in at an angle and it seemed to work! 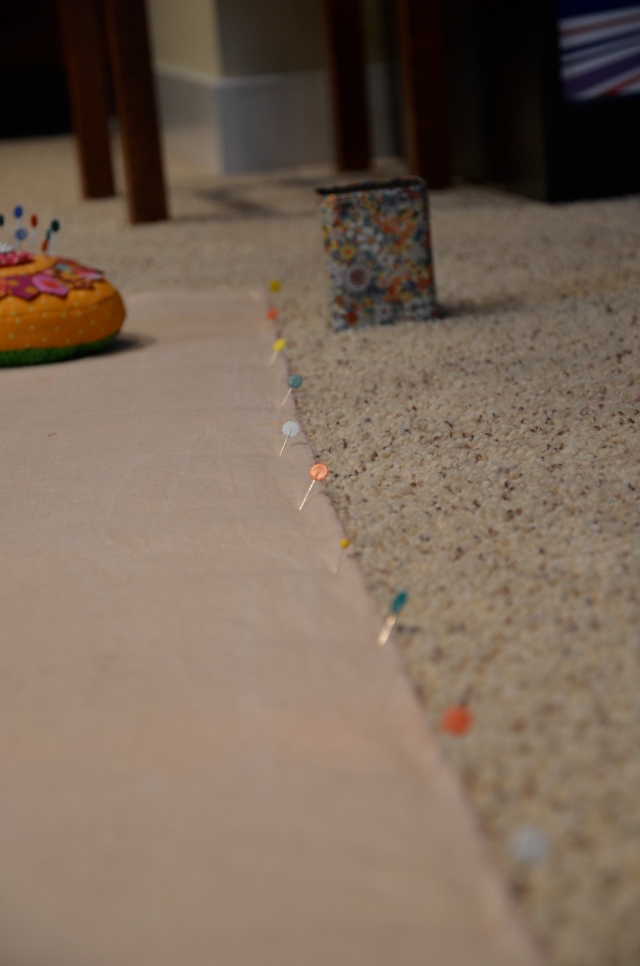 I then stretched out the batting and did the same thing. I pinned it all the way around. The longer pins aren’t quite as study as the shorter ones so I ended up with a few bent pins. I won’t die from that…

Then added the quilt top. I did not need to pin it in place but I suppose I could have. It stuck pretty well to the cotton batting and I pinned every other pin in then went back and filled in to about every 6 inches, my standard.

In the beginning, I was so cringing at the thought of using all these fabrics together. Somewhere along the line I went from this being a practice machine quilting quilt to a quilt that I may just hand quilt after all. I love it! Even if it’s pink.

And the back. The nice tight back! Of course, it has loosened up, but in equal proportions to the other layers!

This quilt shares the same backing fabric as other quilts from long ago, I just don’t remember which ones….

I’m proud to say no materials were purchased for this quilt and it still came out nice.

Check out what everyone one else is up to their elbows in over at Lee’s Freshly Pieced blog.

9 Responses to Diamonds really are a girl’s best friend.