Last week I was kicking myself because in the middle of a project I ran out of natural colored quilting thread. Who runs out of such a basic item, one I use constantly. Seriously. I tore the house apart looking for just one more spool, but it was not to be. So, I ventured out and braved the heavy construction and headed to JoAnn’s for a spool of thread. One measly spool of thread. I wandered around trying to find something else to spend my other 50% off coupon on and had just about given up when this magazine jumped out at me. Keep in mind, I *never* buy quilting magazines. I’d rather spend my money on fabric! As I was waiting in line I thumbed through it and it looked like it had several interesting projects in it and of course ads for all kinds of things I didn’t even know were out there…  I decided to splurge and get it using my coupon.

Later at home, I was eating and thumbing through it when I just about choked on my lunch.

Besides all the really interesting projects, there is a nice article on the Blogger’s Quilt Festival. I had been interviewed and asked to submit photos of my Bubble quilt, from last fall’s BQF but never heard anything more about it. Well, it finally made it to print. Unfortunately, my quilt was not included…. but… 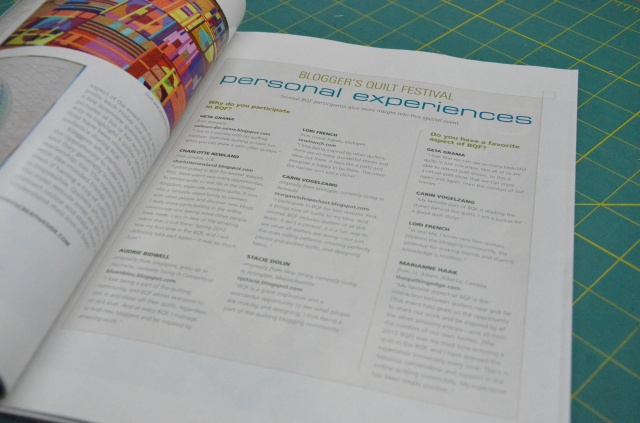 I was quoted twice and my blog address was included! How about that?! That was a pretty cool random surprise! I think it’s amazing when sometimes you are drawn to something and don’t understand why and then after the fact you realize why. That’s what this felt like. Of all the magazines there were to pick from, this was the only one I even picked up. 🙂

Continuing on with last week’s project, I’ve made lots and lots of 1/4″ bias covered cording.

I trimmed it down to size allowing a 1/2″ seam allowance. I like to make it wider than necessary because I think it’s easier to seam up, then trim it down, as opposed to it barely being wide enough and it twisting off the cord as you’re trying to sew it with your zipper foot, then not having enough of a seam to insert in to a seam…. I am getting smarter as I get older! And besides I had lots of extra bias cut from covering the 1/2″ cording for the duvet cover, which was naturally wider. I have also learned that if I hold a finger alongside the cording, as I make it, the bias fabric lays much smoother. See how smart I’m getting? LOL!

I also made 24 ties for the bumpers. I cut them at 16″ x 3″, folded them in half, lengthwise, stitched them the length with a slight angle on one end and then turned them right side out and pressed them.

Along with the other projects I’ve been working on, I got two of six of the bumpers finished. 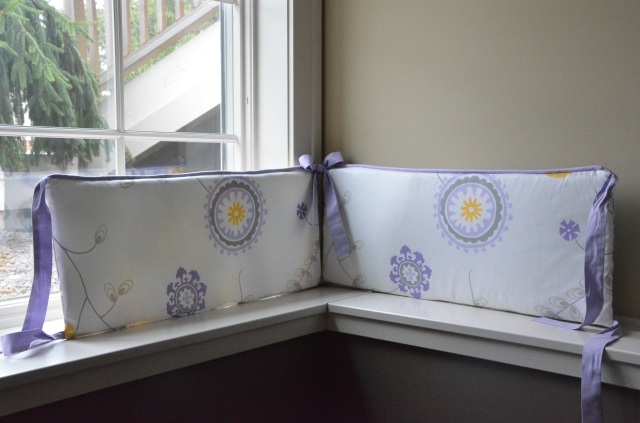 I really, really like how they are turning out. I wish a had a crib to try them out on, and the baby girl to go in it!

Pretty sure what the rest of my week looks like…

Linking up with Freshly Pieced and Fabric Tuesday.