as I play with my very first Liberty of London, tana lawn, yardage! This one is called Multi Flowers 0025a, over at Purl Soho, where I picked it out.

They have a beautiful selection and they are also one of the few online stores to carry Quilter’s Dream batting. I love supporting my local stores, but you can’t always get what you want….

Anyway…. with a picture in my head, an invisible zipper and hand-made rosettes, let’s see how this is going to work.

I whipped a pair of these coasters out for my Valentine, last week. I didn’t have a plan, just some fabric scraps. The first one turned out best. 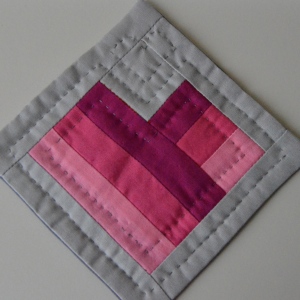 The second one…. It’ll use, even if it’s proportions aren’t quite right. LOL!

Now I’ll type it up so I can make matching ones and you can make one, too, if you like!

For reference, I used 1/4″ seams. The small gray square is cut at 1 3/4″. The colored strips below it are cut at 1 1/4″ wide. Each of the three colors are about 6″ long, all stitched together then added as pictured, to one side of the gray square, trimmed, then added to the gray square and colored strip side.  I then trimmed it square to 3 1/2″. I added 1 1/4″ strips of gray on all sides and trimmed square again. Cut a backing piece the same size as the finished front. I finished it with the flip and turn method, like a pillow slip, no binding needed. Layer the batting, then the backing square (good side up) and the front, (good side down) and stitch around all sides, leaving a 2″-3″ opening on one side. Turn, press and stitch the opening closed, quilt as desired. Do it now and you’ll be all set for next Valentine’s Day! Hope it makes sense!

Julie Otsuka’s first novel When the Emperor Was Divine was an enjoyable read and an especially quick one, coming in at under 150 pages. It’s the story of a Japanese/American family reclassified and their days of internment in a Utah enemy alien camp during WWII. It’s told in an interesting voice, no names given, as if everyone is just another anonymous, faceless enemy, no more, or less, valuable than the next. I had not read much about this side of WWII and enjoyed it. 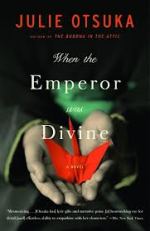 Since that one was so quick I picked up another of her books, Buddha in the Attic, and read it, too. It is the story of Japanese women coming to San Francisco in the WWII era, meeting their new husbands after only seeing their (or their best friend’s) photo. It follows as farm laborers and maids, learning the language, child rearing, missing their families, to ultimately rejecting their heritage and history.  Another short but good one, I wouldn’t necessarily recommend reading them back to back though!

And it really doesn’t matter is which order you read them, though chronologically Buddha would be first, even though The Emperor was written first.

8 Responses to Quilting is paused…