and then there was light!

After 12 summers here, at the cottage, it’s nice to finally have some extra light in my sewing space.

I finally got all the light switches in the right position and the stars must have aligned . Maybe it has to doing with this being the Summer Solstice?? It didn’t hurt that I found some paperwork, while cleaning out a filing drawer, that showed “this” ceiling fan and a remote control. Yup, found that, too. New batteries, switches that I had no idea what they ran, now I know.

I have light and a much needed fan in this vaulted office space on this muggy, gray day.

Back to my WIP…

On a hot day, driving, up to the cottage, it turned into this.

Quite the manly seat cooler, don’t you think. Apparently my husband doesn’t care what it looks like as long as there is something between him and the leather seat. Notice it is pin basted ready to be quilted.

So back to last week’s name that quilt.

After you all helped me with the final design I headed out to pick up the lime and some more Kona Ash gray. Remember I was working with what I had… And of course, the bolt had been replenished and the dye lot was different. So that became this. 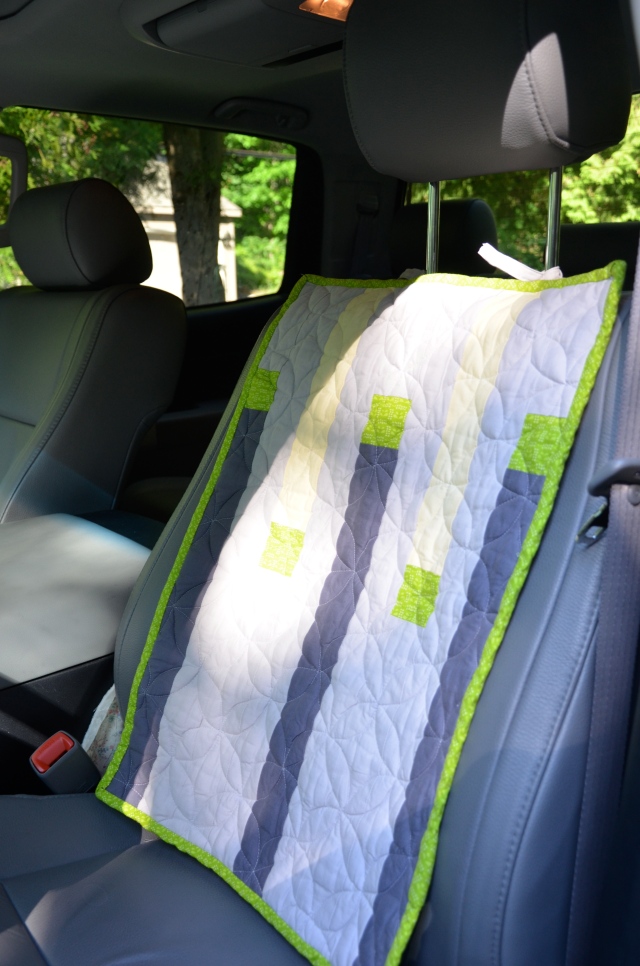 Much more appropriate, don’t you think? It also gives me an idea for one more placemat, LOL!

I decided to give Elizabeth’s, over at Oh, Fransson,  orange peel Free Motion Quilting a try, since you all have said, small project, just do it.

This quilting pattern was a given, for this project, since these are 2″ finished strips. I’ve admired it since I first saw her put it into action. She makes it look so simple. So I drew it out, put my darning foot on, as she advises, and went to town. Once up and down again and I took it off to see what it looked like. Ouch. The way it looked didn’t help this ego of mine. I then drew it out using my circle template, which is all it really is, when you dissect it. Very clever that Elizabeth is! I then switched to my even feed walking foot and liked the control I had much better. Is this a natural feeling? Does everyone feel this way, in the beginning?

After it was bound and washed I think the darning foot strip blends in, and looks better, than the work removing it would take!

I now have the still undecided on a name, gray quilt, rebuilt and ready to go, again. Not sure if I should attempt this FMQ pattern again, in a larger project, or not. It is a lot of work! At this point, hand quilting feels faster. Anyone else done this orange peel design? Any advice for this Newbie FMQ? Any other FMQ designs that you *see* for this quilt?

6 Responses to and then there was light!