One of my favorite memories, from this point, in my life was Grandma teaching us to make Macaroni and Tomatoes.  Probably not an actual lesson, but we were probably starved and on her heels….. as usual.  And boy could she cook.  Grandma Ellis learned from the best. 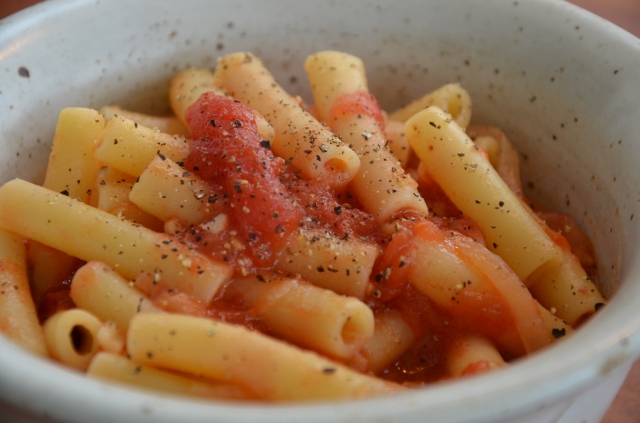 Cook up 8 oz. macaroni, according to the package directions, al dente.

Slice one yellow onion, in half, then into slivers.  Saute up in 2-3 TBS of butter, or meat grease.  Grandma used meat grease, from the can kept on the back of the stove.  When the onion is cooked up add in 2 chopped garlic cloves and let cook up a bit more.  Then add in a quart of home canned tomatoes, with about 1/2 of the juices.  Reserve the rest, in case you need more liquid, later on.  Break up the tomatoes, then add in the cooked macaroni and let simmer for a few minutes, let the flavors mingle and the macaroni cook a bit more.  If you need you can add in more liquid, here.  Butter or meat grease is very important to the depth of flavor, in this recipe, seriously.  Olive oil could work, but Grandma probably didn’t know about that….  Pepper generously and eat until your heart’s content.  Soak up every bit of the sunshine grown right into the tomatoes, like they were meant to be….  And if you have had a really successful canning season, don’t be afraid to use *2* quarts of tomatoes!!!

This entry was posted in Cooking, Eating, Family, Recipes. Bookmark the permalink.