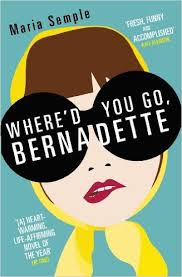 Not sure when or why this book popped up on my radar but now that I have finished it I see that there is a movie in the making. Cate Blanchett is talk of the leading role. Not sure it will be a movie worthy of theater prices but Netflix or Redox won’t be out of the question.

A satirical character study about the city of Seattle, private school moms and Microsoft’s corporate culture. This book is often billed as hilarious, maybe because the author, Maria Semple, was a writer for Arrested Development but I don’t remember more than just an occasional chuckle. The ‘comedy’ was on cruise control set at ‘amusing’. I felt it had layers of humor, and the dark underlying humor, spoke to me most effectively. This doesn’t take away from the story but I don’t want you to expect it to be one of those books that makes you think you will look like a lunatic from cackling as you read…

The author lets fly at modern parenting, Seattle, corporate culture, envy, modern life and Canadians… Bernadette is an agoraphobic architect who has lost sight of anything else in her life but her devotion to her daughter and is being driven mad by her somewhat self-enforced isolation in Seattle. As the family implodes her teenage daughter is left to put the puzzle back together and a puzzle it is. It rattles along at a fast clip, told in the form of emails, documents, police reports, letters, notes, even the transcripts of a TED presentation. The story circles around Bee Branch trying to find her mother, Bernadette Fox, who has suddenly disappeared. Kind of gimmicky but still very entertaining.

2 Responses to Where’d You Go, Bernadette by Maria Semple