I’ve read several books in this same hiking adventure genre. Bill Bryson’s A Walk in the Woods: Rediscovering America on the Appalachian Trail was funny. Southbound, The Barefoot Sisters, #1, by Lucy Letcher and Susan Letcher was fluffy. Into the Wild by Jon Krakauer was some serious stuff. 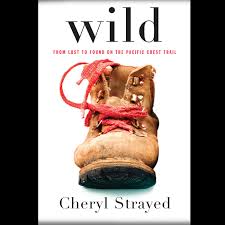 The following review contains some spoilers.

In Wild: From Lost to Found on the Pacific Crest Trail by Cheryl Strayed, I was expecting Bill Bryson mixed with (Wo)Man Vs. Wild. It reads more like Eat, Pray, Love mixed with college liberal’s sexcapades. This book’s soul-baring stuff rode the fine line between whining and brutal honesty.

The thoughts that stuck with me.

She had no experience as a long-distance hiker. None, nada, zilch. She never bothered to even put on her overpacked gear before she stepped foot on to the trail. The whole idea was little more than “an idea, vague and outlandish and full of promise.” The most impulsive decision of her life: to hike the Pacific Crest Trail from the Mojave Desert, through California and Oregon, to Washington State—and to do it alone.

She brought a whole box of condoms with her, on her hike, to “find herself”! She is still having one night stands with strangers a week before she is at the end of her journey on the Pacific Crest Trail.

She loses one of her too-small REI shoes off the side of the  trail? Seriously? Who does that? Then is MAD when they can’t overnight her new ones because she is in the middle of nowhere.

And the kicker has to be the last chapter when she touches the Bridge of the Gods, and next thing we know, all her intimacy issues have been resolved. Nine years into a stable marriage to a wonderful man, wonderful kids and a wonderful life. The idea that punishing physical activity is the panacea for mental suffering is absurd and possibly dangerous. Such a journey can be a source of strength and self-esteem, but being alone in one’s head while ripping one’s feet to bloody shreds is not a reliable path to resolving childhood abandonment and mistrust of/intimacy issues with men.

I liked and I hated Cheryl at the same time. I admired her for hiking 1,100 miles and, at the same time, resented that she left her husband and ran away from her problems to find herself. All she needed was to stay away from the drugs and to focus on something rather than to linger on how she missed her mom and what a bad wife she was.

I think I’ll stick with Bill Bryson’s humorous style of writing, the next time I find myself wanting to take a walk in the woods.

This book topped the 2012 Best List, by GoodReads readers, as the favorite in the Memoir & Autobiography category. I have to wonder how many readers read more than one of the nominated books….  When I added it to my “to-read” list, I had no idea a movie was being made of it. With all that said, only because Reese Witherspoon will play Cheryl, will I be tempted to rent it….

2 Responses to Wild by Cheryl Strayed